OpenTSDB is an extensible distributed time series Database database, whose bottom layer relies on HBase and makes full use of HBase's features of distributed column storage to support millions of reads and writes per second.

In this scenario, it is required to store the messages that meet the conditions under the topic specified by EMQX to the OpenTSDB database. In order to facilitate subsequent analysis and retrieval, the message content needs to be split and stored.

The data reported by the client in this scenario is as follows:

Open EMQX Dashboard, enter the Resources page on the left menu, click the New button, select the OpenTSDB resource type and complete the related configuration to create the resources. Enter the Rules page on the left menu and click the New button to create a rule. Here we choose message.publish as the trigger event. When EMQX receives the PUBLISH message, the rule is triggered for data processing.

After the trigger event is selected, we can see optional fields and sample SQL on the interface: 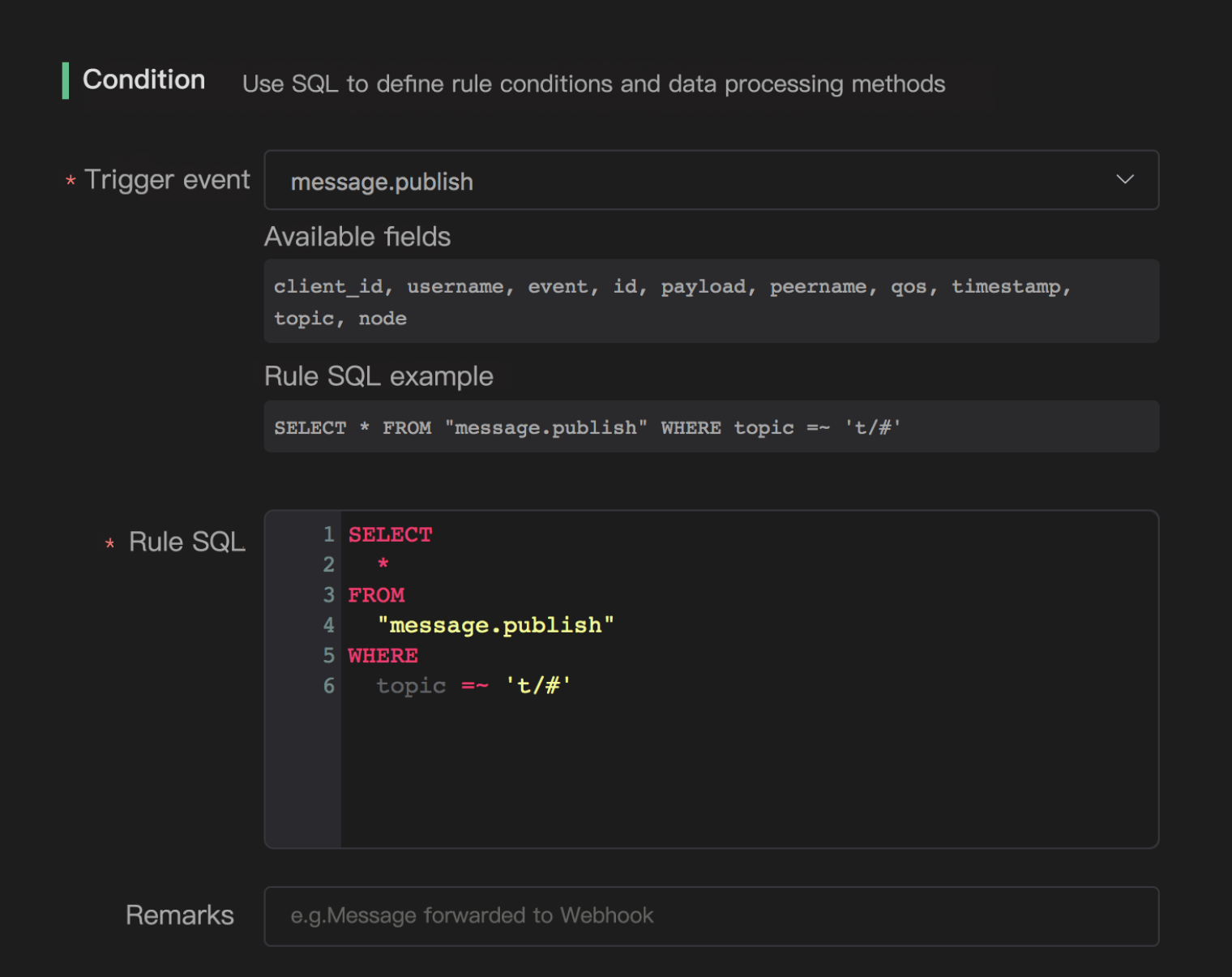 The rules engine uses SQL statements to filter and process data. For example, in the scenario mentioned above, when we need to extract the fields in payload , it can be achieved by payload. <FieldName>. At the same time, we only want to deal with the topic stat / cpu, so we can use the topic wildcard= ~in the WHERE clause to filter the topic:topic = ~ 'stat / cpu', and finally we get the following SQL:

With the SQL test feature, we can quickly confirm whether the SQL statement we just filled out can achieve our purpose. We firstly fill in the payload and other data for testing as follows: 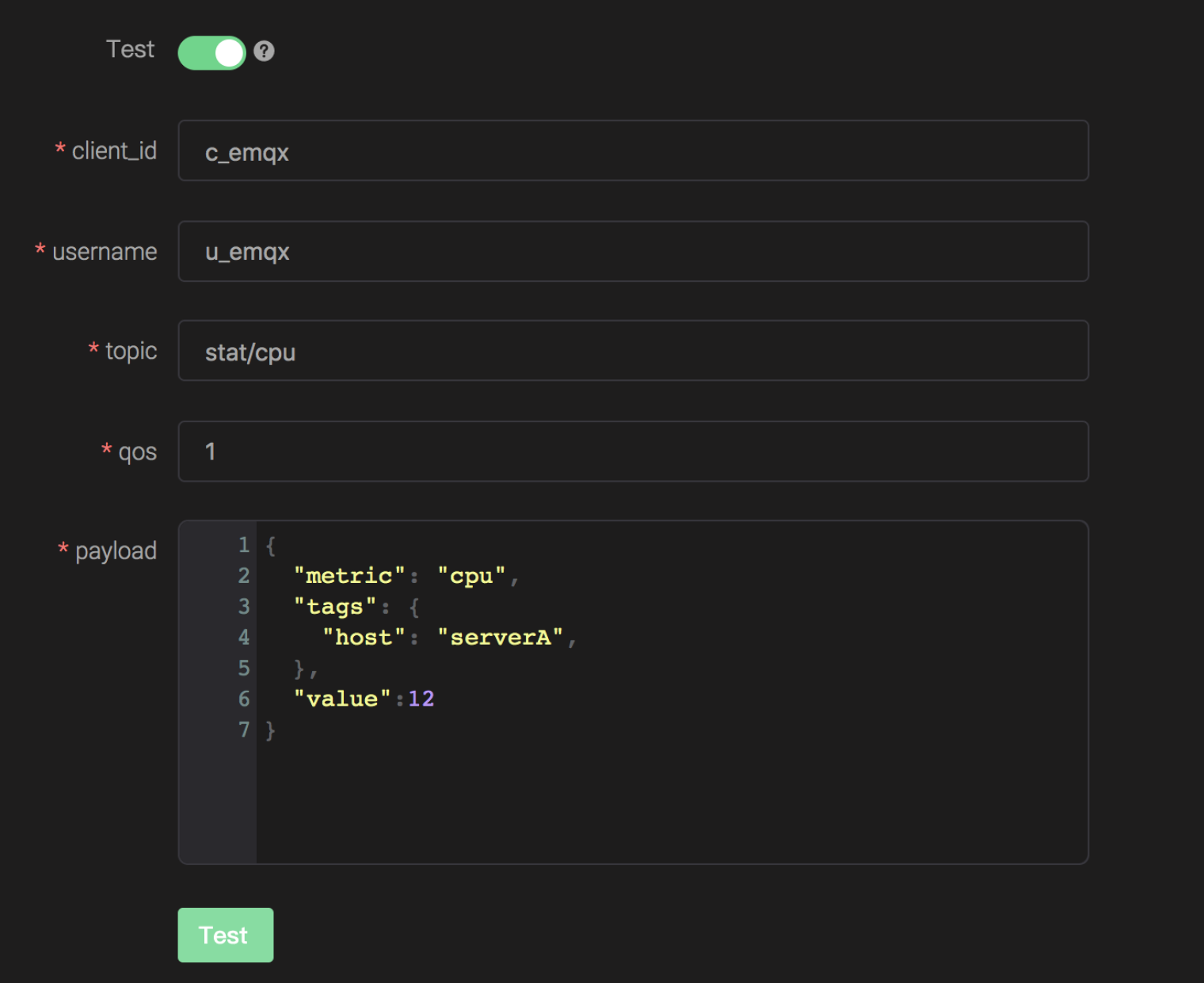 Then click the Test button, we get the following data output:

After the SQL condition input and output are correct, we continue to add corresponding actions, configure to write SQL statements, and store the filtered results in OpenTSDB.

Click the Add button in the response action, select the action of Save Data to OpenTSDB, select the OpenTSDB resource just created and complete the remaining parameter settings. Several parameters that OpenTSDB requires for operation are:

Here we all use the default configuration, click the New button to complete the rule creation. 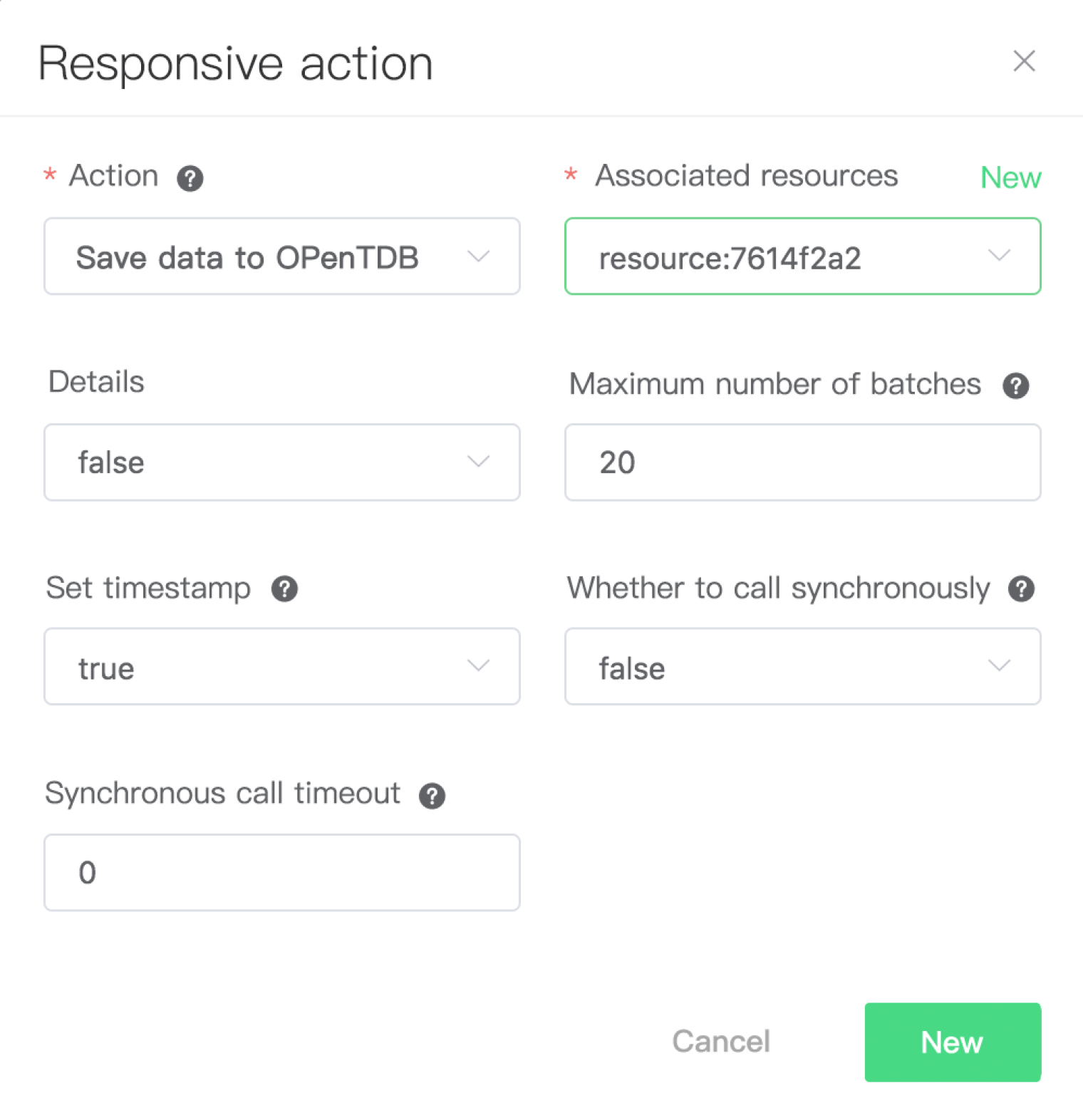 We have successfully created a rule that contains a processing action. The expected effect of the action is as follows:

Test with Websocket tools in Dashboard

Switch to the Tools -> Websocket page, use any information client to connect to EMQX. After the connection is successful, send the following message in the Message card:

Click the Send button. After sending successfully, we can see that the number of hits of the current rule has changed to 1.

Then, send a query request to OpenTSDB through Postman. When we get the following response, it means the new data point has been added successfully: So far, we have implemented business development to store messages to the OpenTSDB database through the rule engine.

InfluxDB is an open source database for storing and analyzing time series data， with built-in HTTP API, and the support for SQL-like statements and unstructured features are very friendly for users. Its powerful data throughput and stable performance make it ideal for the IoT area.