The EMQX 3.2 version introduces the ''Rules Engine'' feature that supports screening data reported by the EMQX Broker terminal, which is processed and streamed to the back-end database or other message queues. This article uses a specific scenario to explain "How to use the rules engine to forward messages to Kafka"

This scenario requires bridging the message under the topic specified by EMQX and satisfying the condition to Kafka. In order to facilitate subsequent analysis and retrieval, the message content needs to be split.

The information reported by the device in this scenario is as follows:

When the reported value of engine speed is greater than `8000', the current information is stored for subsequent analysis of the user's vehicle usage. 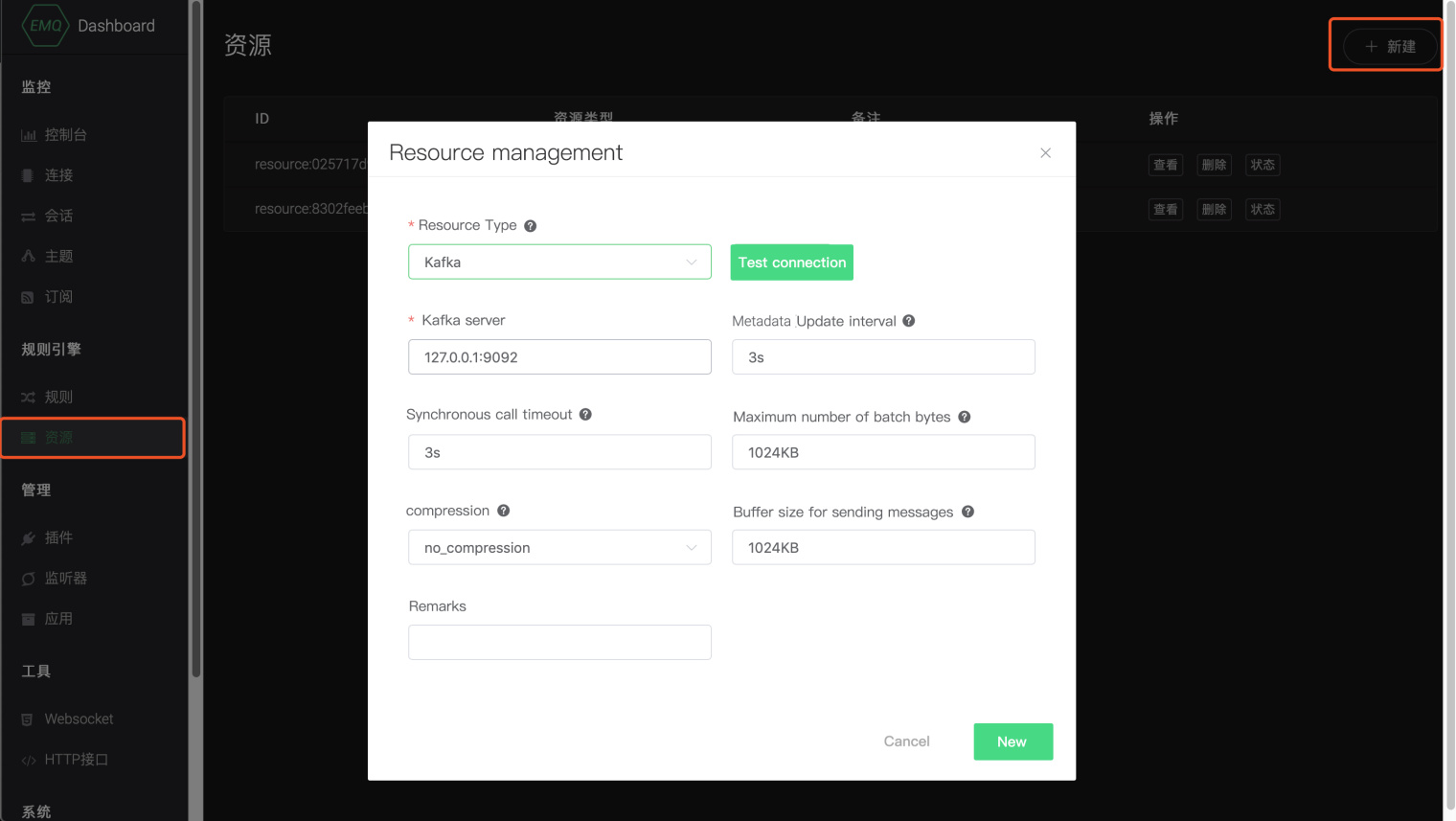 The network environment of the nodes in the EMQX cluster may be different. After the resources are created successfully, click the Status button in the list to check the connection status of each node. If the resources on the node are unavailable, check whether the configuration is correct and the network connectivity is correct, and click the Reconnect button to manually reconnect.

Go to the Rules page on the left menu and click the New button to create the rule. Select the trigger event of publishing message, which is triggered when the message is published for data processing.

After selecting the trigger event, we can see the optional fields and sample SQL on the interface:

The rules engine uses SQL statements for processing/arranging terminal messages or connection events. In this business, we only need to filter out the key fields in payload for use. We can use the payload.<fieldname> format to select the fields in the payload. In addition to the contents of the payload, we also need to save the id information of the message. SQL can be configured in the following format:

Conditional filtering can be done by using the SQL statement WHERE clause, in which we need to define two conditions:

Combine the previous step to get the SQL as follows:

With the SQL test function, we can view the current SQL processed data output in real time. This function requires us to specify the simulated raw data such as payload.

The payload data is as follows. Note to change the tachometer value to satisfy the SQL condition:

Click the SQL Test toggle button, change topic and payload to be the information in the scenario, and click the Test button to view the data output: The test output data is:

Add a response action, bridge the message to Kafka

After the SQL condition input and output is correct, we continue to add the corresponding action, configure the write SQL statement, and bridge the filtered result to Kafka. We successfully created a rule that contains a processing action, and expected result is as follows:

Test with the Websocket tool in Dashboard

Switch to the Tools --> Websocket page, use any client to connect to EMQX, after the connection is successful, sends the following information with message card: Click the Send button to see that the hit statistic value of the current rule is 1.

Then use the Kafka command to see if the message was produced successfully:

So far, we have implemented business development of a rule engine bridging message to Kafka's through the rules engine.

The open source version of the rules engine only supports forwarding to Web Server, and the function to forward to Kafka is only available in the Enterprise Edition.

In this scenario, it is required to store the messages that meet the criteria under EMQX in the MySQL database. In order to facilitate subsequent analysis and retrieval, the message content needs to be split for storage.

In Internet applications, message queues are generally integrated to perform operations such as peak clipping, current limiting, and queue processing to decouple data from services. With the help of RabbitMQ, Kafka, RocketMQ, Pulsar and other message and stream middleware bridging functions provided by EMQX, IoT projects can also use this model to solve the above problems.

Redis is a fully open source, high-performance key-value database that adheres to the BSD protocol for free.