Before reading this guide, we assume that you have known simple MQTT and MQTT broker.

EMQX Broker starts supporting the function rate limit from version V3, including the limit on the PUBLISH packet receiving rate and the TCP data package receiving rate. This article will introduce the use and configuration of this function in detail.

The format of configuration is: <Number>,<Duration>, which means the maximum number <Number> of PUBLISH packet that can be allowed to receive during the time <Duration>.

The format of configuration is: <Rate>,<Burst>, which means the allowed average data package receiving rate is <Rate>. However, the allowed maximum number is depending on the value of <Burst>. See the next section for details: rate limit algorithm token bucket-algorithm

active_n actually means that the number of datagrams allowed to be read in the underlying asynchronous I/O. Every time, when the asynchronous read operation reaches this limit, it will be temporarily switched to the Sync mode. Every time, when it switches to the Sync mode, it will check the rate limit one time. Therefore, if the value is larger, the throughput performance of this system is better; if the value is smaller, rate checking is more accurate and the inflow is more stable and the security of the system is higher.

The publish_limit and rate_limit we mentioned are implemented by the token bucket algorithm. The algorithm logic is as follows: 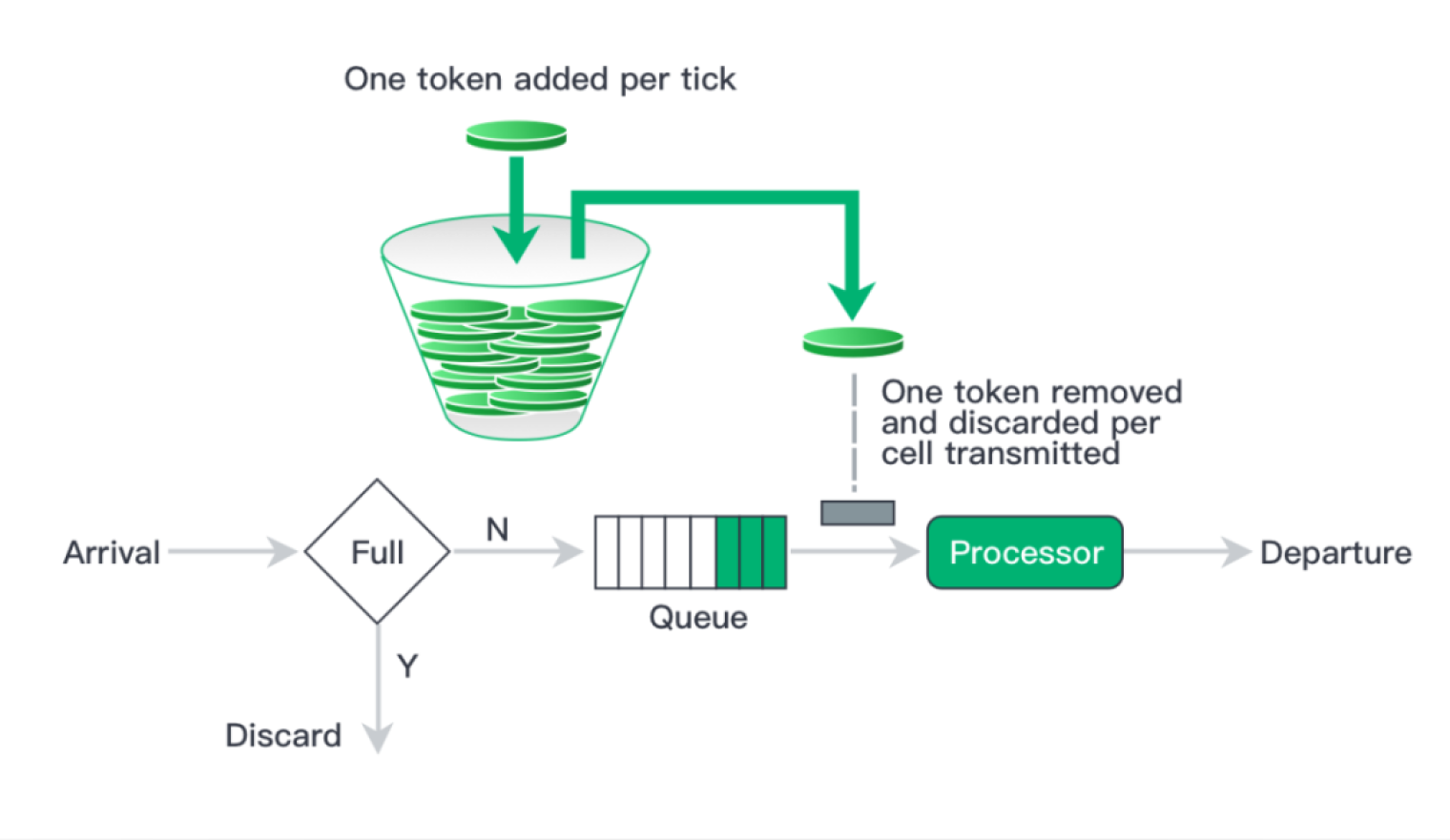 Through token bucket algorithm, we can:

All in all, it can be simply understood as rate is the average request rate and burst is is the instantaneous maximum request rate.

The implementation of EMQX rate limit

Based on the token bucket algorithm, EMQX's implementation logic for rate limit is as follows:

The example of rate limit configuration

The configuration of rate limit

The above configuration means:

Therefore, users need to set <Burst> according to the size of the real packet. EMQX highly recommends that configure it as (max_packet_size * active_n) / 2 to prevent from block.

The above configuration means:

In addition to the above Rate Limit, it is also supported that perform the following limits for the TCP, WebSocket and other connections:

The maximum connection number that exists at the same time allowed, namely the maximum number of simultaneous online clients.

The maximum number of concurrent connections allowed per second.

This article takes a common IoT usage scenario as an example and describes how to use edge computing to achieve fast, low-cost and efficient processing of business.

In this scenario, it is required to store the messages that meet the criteria under EMQX in the MySQL database. In order to facilitate subsequent analysis and retrieval, the message content needs to be split for storage.

This article takes a common IoT usage scenario as an example and describes how to use edge computing to achieve fast, low-cost and efficient processing of business.