EMQX is the most scalable and popular open-source MQTT broker with a high performance that connects 100M+ IoT devices in 1 cluster at 1ms latency. It can move and process millions of MQTT messages per second. The EMQX 5.0 has been verified in test scenarios to scale to 100 million concurrent device connections and is the first product to introduce QUIC to MQTT.

When using EMQX, it is necessary for users, operators and developers to monitor and observe the running status and metrics of it in time to find problems and deal with them. In addition to using the built-in Dashboard, EMQX also provides APIs to integrate monitoring data into third-party monitoring platforms to monitor the running status of EMQX, including cluster node status, connections, subscriptions and topics, message throughput, and other related metrics.

Prometheus is an open-source monitoring and alerting solution developed by SoundCloud, which supports a multi-dimensional data model, flexible query language, powerful alert management, and other features. Grafana is an open-source data visualization tool that helps multiple data sources, including Prometheus.

Following is the way to quickly install and start EMQX 5.0 by using Docker:

In addition to using Docker to install EMQX, we can also use RPM or DEB packages to install it. For specific installation methods, please refer to EMQX 5.0 Installation Guide.

After the installation, we can open http://localhost:18083 to access the EMQX Dashboard to view the running status. If you can access it, usually, EMQX has been installed successfully.

In the same way, we will use Docker to quickly install and use Prometheus in the example because we have yet to start to configure Prometheus so that we can pull a Docker image provided by Prometheus.

Users can also refer to the Prometheus document to download and use the binary package to install and run Prometheus.

Below is the way to quickly install and start Grafana by using Docker:

Users can also refer to the Grafana document to download and use the binary package to install and run Grafana.

After Grafana installation, we can open http://localhost:3000 to access Grafana. If we can access the login page of Grafana usually, it means that Grafana started successfully. 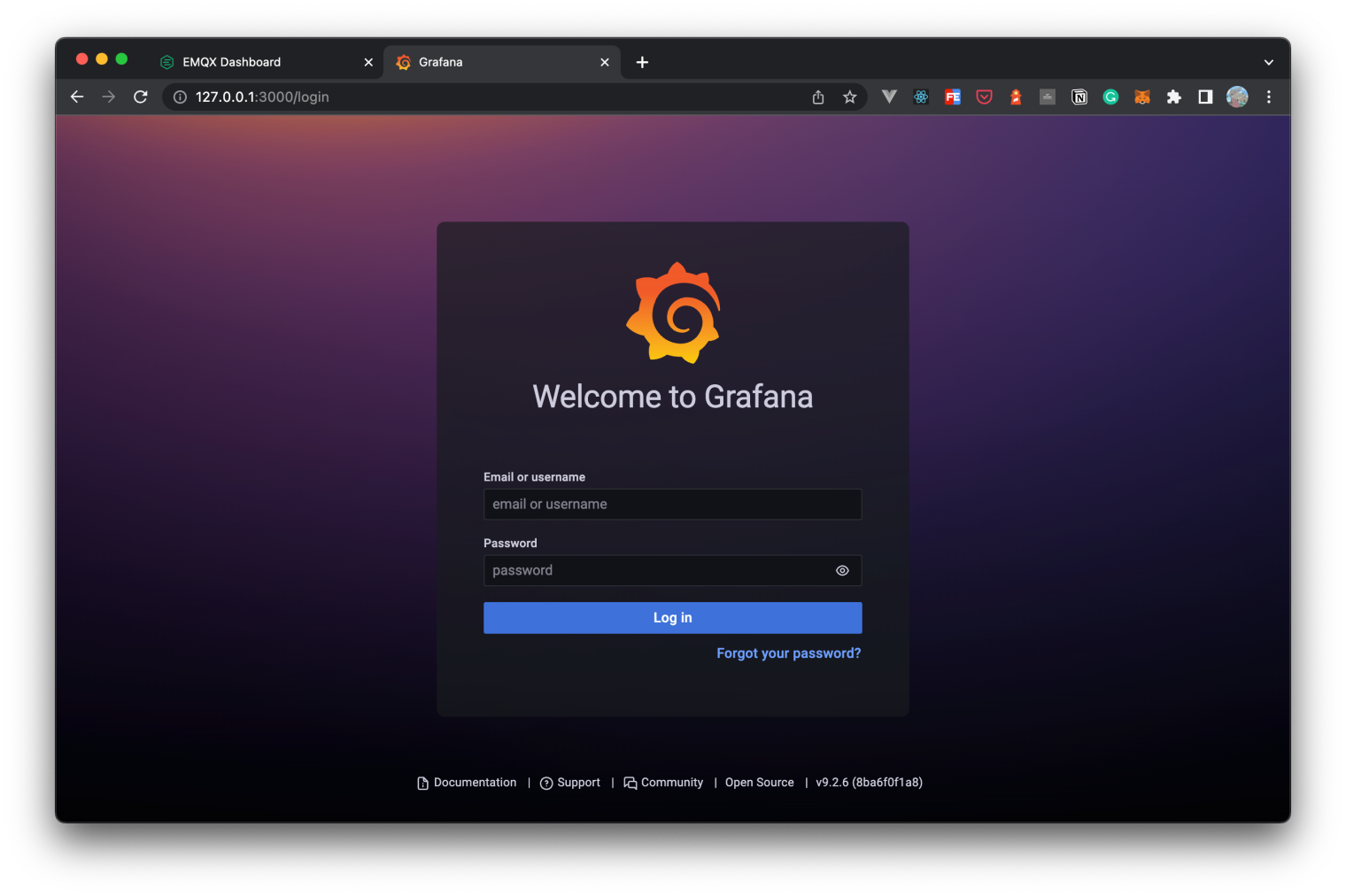 When we completed the preparation work, we needed to configure Prometheus so that it could generally collect the monitoring data of EMQX.

EMQX 5.0 provides an HTTP API to get Prometheus format monitoring data -- /api/v5/prometheus/stats, which does not require authentication information. We only need to configure it to the metrics_path in the configuration file.

For using Node Exporter to get the monitoring data of the host, we also need to configure the address of the Node Exporter service to the static_configs in the configuration file.

Note: When using the configuration file, you need to replace the IP address in the targets of each service with the actual IP address of the service you deployed. If you are using local deployment, you can ignore this reminder.

Ultimately, we save the above configuration file content as prometheus.yaml and copy it to the /etc/prometheus/ directory or store it in the custom path where you need to keep the file. At this point, we have completed the simple configuration of Prometheus.

If you install Prometheus by other methods, you can specify the configuration file path when running Prometheus, for example:

We do not need to use the Pushgateway service because EMQX supports getting data metrics through the API. Suppose you blindly use PushGateway to get data. In that case, you may encounter some problems, such as: when Pushgateway monitors multiple instances, Pushgateway will become a single point of failure, Pushgateway will not discard or delete its Series, and will continue to expose it to Prometheus, and so on.

But in some cases, we may need to use Pushgateway to collect data metrics.

For example: when the EMQX service runs in Docker containers or Kubernetes clusters, we can use Pushgateway to collect data metrics instead of exposing the EMQX API to the external network. And usually, the only valid use case for Pushgateway is to capture the results of service-level batch jobs. Click to view and learn more about When to use Pushgateway.

For more about installing and using Pushgateway, please refer to Pushgateway Installation Document. At this point, we can access the Pushgateway Dashboard by http://localhost:9091.

In using Pushgateway, you need to add the following configuration to the scrape_configs section of the Prometheus configuration file:

Note: On the configuration, the targets need to be replaced with your actual Pushgateway service endpoint.

After completing the configuration of using Prometheus to collect data metrics of EMQX, we can use Grafana to visualize the monitoring of EMQX's metric data. In the above steps, we have successfully opened the Web console of Grafana. For the first time using Grafana, the default account and password are admin. After logging in successfully, we can add the data source.

Prometheus as a Data Source

After the configuration is completed, we can use Prometheus as a data source to get monitoring data in Grafana. Next, we can continue to add the Dashboard template to visualize the monitoring of EMQX's data metrics. You can also manually create a Dashboard and add charts according to your needs.

We provide a default Grafana Dashboard template that You can directly import into Grafana and select the newly created Prometheus data source. After the import is successful, open the Dashboard panel, and you can see the monitoring data of EMQX.

You can download default Dashboard templates from EMQX | Grafana Dashboard, or you can click the Download button on the help page of the configuration page of EMQX Dashboard's Monitoring Integration.

The specific import steps are as follows:

Note: By default, the template will monitor the metric data of the entire EMQX cluster.

Users can also customize the Dashboard based on the default template, add their metrics or modify the style of the chart, etc. For specific operation steps, please refer to Grafana Official Document.

How to Configure in EMQX Dashboard

The EMQX version used in this article is 5.0.11. You can also get more monitoring integration operation information from this version by clicking the "Help" button on the Configuration -> Monitoring -> Integration page in the EMQX Dashboard.

On the help page, you only need to install the Prometheus and Grafana services according to the step prompts and then fill in some vital configuration information in the configuration items.

Such as the endpoint of EMQX, the API for obtaining metric data, etc. Click the Generate button to generate and download the configuration file automatically, and finally, you can download the default Grafana Dashboard template.

For more about configuring the integration of Prometheus in Dashboard, you can refer to the EMQX Dashboard Configuration Monitoring Integration document.

This article briefly introduces how to use Prometheus to collect the data metrics of EMQX and then use Grafana to visualize the monitoring of EMQX's data metrics. After EMQX 5.0.11, you can also get more monitoring integration operation information by clicking the "Help" button on the Integration page in the EMQX Dashboard.

Reading our Metrics and Stats document, you can learn more about the data metrics you can query.

For the tutorial articles on using the rules and configuration alerts in the monitoring system, we will introduce them in the following articles, so stay tuned.

EMQX software engineer, responsible for the front-end development of EMQX, is also the developer and maintainer of MQTT X.

This article will introduce and explain how to bridge the data from EMQX to HStreamDB and fulfil the persistent data storage.

Taking the common scenarios of Internet of things as an example, this article introduces how to use the EMQX message middleware and the open source data visualization solution of InfluxDB + Grafana to conveniently display a large amount of time-series data of IoT devices.