Design of Million-Level Message Throughput Architecture for an IoV Platform

In the previous article, we introduced how to design different business scenarios in the IoV TSP platform. Every piece of data reported via the IoV is valuable because there is huge business value behind it when the vehicles continuously generate a large number of messages. Therefore, the vehicle TSP platform we build also needs to have ten-million-level topic and million-level message throughput capability.

IoV messages are divided into uplink and downlink. The uplink message is generally an alarm message sent by the sensor and the vehicle, which sends the equipment information to the cloud message platform. The downlink message generally includes remote control instruction set message and message push, which serves as corresponding instructions to vehicles sent by the cloud platform.

In IoV messaging throughput design, we need to concentrate on the following factors:

During the driving process, GPS and on-board sensors are constantly collecting messages. In order to receive real-time feedback information, they also report and receive messages frequently. The frequency of reporting is generally 100ms-30s, so when the number of vehicles reaches the order of millions, the platform needs to support millions of message throughput per second.

The vehicle collects its own environment and status information through various sensors. The overall message packet size generally varies from 500B to several tens of KB. When a large number of message packets are reported simultaneously, the IoV platform is required to have stronger capability to receive and send large message packets.

Message data can only be transmitted through a wireless network while the vehicle is being driven. In most IoV scenarios, the delay requirement for the vehicle is ms level. The platform also needs to maintain low latency message transmission even with million-level throughput.

Number and Level of Topic

When considering million-level message throughput scenarios, we also need to design specifications for the number of message Topics and Topic tree levels.

For million-level message throughput scenarios, traditional architectures based on shared subscription messages with MQTT clients or writing to relational databases in real-time via rule engines are obviously unsatisfactory. At present, there are two mainstream architectures: one is message access product/service plus message queue (Kafka, Pulsar, RabbitMQ, RocketMQ, etc.), and the other is message access product/service plus time sequence database (InfluxDB, TDengine, Lindorm, etc.).

We will present the implementation of each of these two architectures, using the cloud-native distributed IoT message broker EMQX as the messaging access layer, based on the above correlation factors and best practices from customer cases.

Kafka, as one of the mainstream message queues, has the data persistence capability. It can prevent data loss by persistence data to hard disk and replication. The back-end TSP platform or Big Data platform can subscribe to the desired messages in bulk.

Because Kafka has the capability to subscribe and publish, it can receive from the south, caching the reported messages, or transmit the instructions to be sent to the front end through the interface via the northbound connection.

Taking Kafka as an example to build an EMQX plus Kafka million-level throughput IoV platform:

In this architecture, EMQX, as a message broker, has the following advantages, which can meet the requirements of this scenario:

In order to verify the throughput capability of the above architecture, we can build a million-level message throughput test scenario with the following configuration. Benchmark Tools, JMeter, or XMeter test platforms are available for the load test tool. A total of 1 million devices are simulated, with one topic for each device, which sends messages once per second for 12 hours of pressure testing.

The pressure measurement architecture is as follows:

From the EMQX rule engine, we can see that the processing speed of each node is 100,000/s, and the speed of 10 nodes is 1 million/sec in total.

We can see write speeds of 1 million per second in Kafka and these nodes keep storing.

With the architecture of EMQX+time series database, we can also build a million-level message throughput platform. We take the InfluxDB as an example.

InfluxDB is a high-performance time series database, which is widely used in certain scenarios such as monitoring data of storage system and real-time data of IoT industry. It records messages from the time dimension, with strong write and storage performance, which is suitable for big data and data analysis. The analyzed data can be provided to the background application system for data support.

As shown in the test architecture diagram, the XMeter press simulates 100,000 MQTT clients to initiate connections to EMQX with a new connection rate of 10,000 per second and a client heartbeat interval of 300 seconds. After all connections are successful, each client sends a message with QoS 1 and Payload of 200B per second. All messages are filtered and persistently sent to the InfluxDB database through HTTP InfluxDB rule engine bridge.

The test results are presented as follows: 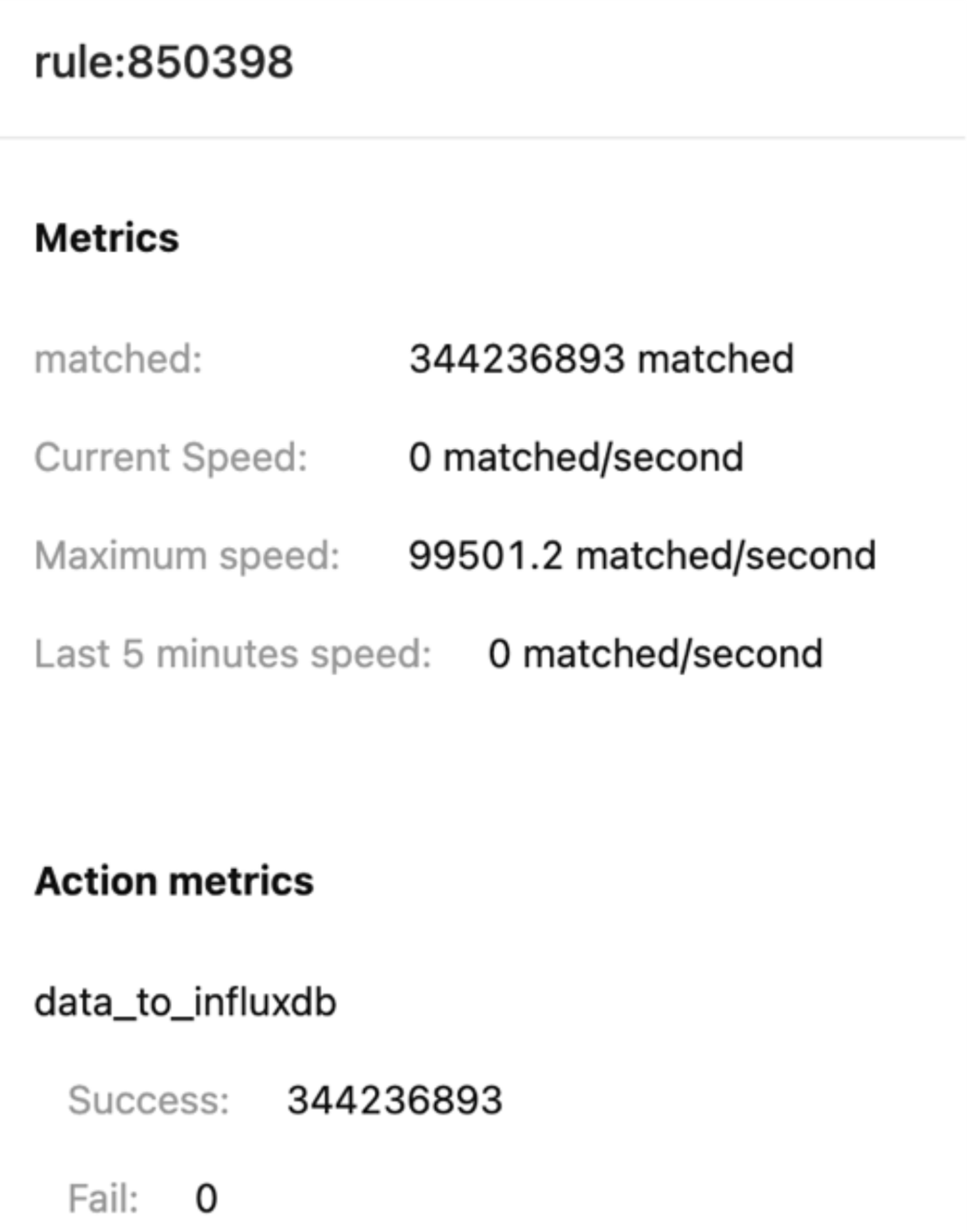 A single EMQX server achieves message throughput persistence to InfluxDB capability of 100,000 TPS for a single server. With reference to the test scenario of EMQX plus Kafka architecture, if the EMQX cluster nodes are expanded to 10, it will have the capability to support 1 million TPS message throughput.

In this article, we introduce the factors that need to be considered in message throughput design of an IoV scenario, and provide two mainstream architecture design schemes of million-level throughput platform. Faced with the increasing amount of data in the IoV scenario, we hope this can help relevant teams and developers with the design and development of IoV platforms.

Other articles in this series

This article wil discuss the acquisition and transmission of MQTT messages for the IoV and how to build a ten-million-level IoV MQTT message platform.

In this article, we will describe how to design the topic of MQTT messages in the process of building the TSP platform of IoV.

In this article, we will introduce the QoS design of MQTT messages in the IoV scenario, which guarantees the quality of data transmission.