Why EMQX Is Your Best Google Cloud IoT Core Alternative

Google made its decision to shut down Cloud IoT Core Service on August 16, 2023, leaving one year for its users to migrate from their service to an alternative one.

The public announcement first appeared at the top of its IoT Core web page, followed by emails to its customers, notifying that exactly one year from now, access to IoT Core Device Manager APIs “will no longer be available. As of that date, devices will be unable to connect to the Google Cloud IoT Core MQTT and HTTP bridges and existing connections will be shut down.”

Now is the time to consider your best Google Cloud IoT Core alternative.

Given that Google IoT Core is based on MQTT, the best alternative options for seamless migration undoubtedly are MQTT-based IoT messaging platforms or services. As a trusted partner to Google Cloud Platform (GCP), EMQ has already brought solid and well-rounded IoT connectivity solutions to our mutual customers. We are here to provide ideal migration options for those seeking the best Google IoT Core alternatives. EMQX, the world’s most scalable open source MQTT Broker, and EMQX Cloud, a fully-managed MQTT service already available on Google Cloud Platform, are both based on open standards, 100% compliant with MQTT 5.0 and 3.x standards and deeply integrated with GCP.

Choose EMQX as Your Perfect Replacement for Google IoT Core

EMQX offers users the ability to connect any device at any scale, then move and processe IoT data anywhere in real-time. The outstanding scalability, high performance, and rich features of EMQX make it an ideal choice for Google IoT Core users:

A True Seamless and Effortless Migration from Google IoT Core

Inheriting the excellent features and performance of EMQX, EMQ also provides EMQX Cloud, a fully managed MQTT service for IoT that enables users to connect IoT devices to any cloud without the burden of maintaining infrastructure.

With announcing support for Google Cloud Platform (GCP) in September 2021, EMQX Cloud is the world's first and only fully-managed MQTT service that supports all major public cloud platforms, including GCP, AWS, and Azure. Enterprises using Google Cloud IoT Core to manage their IoT infrastructures, whether on GCP or other cloud platforms, can migrate their IoT applications and endpoints to EMQX Cloud seamlessly and effortlessly. 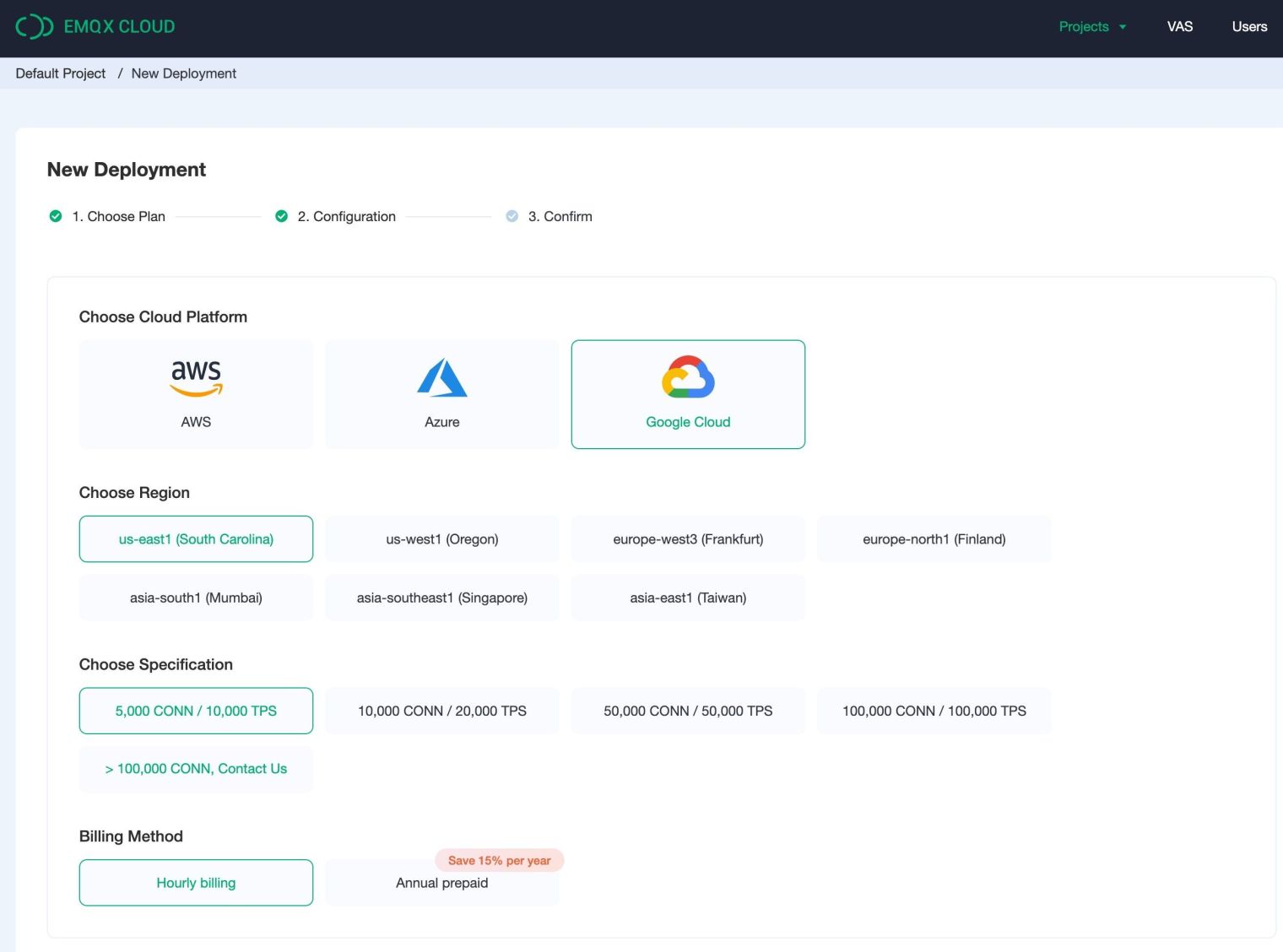 EMQX Cloud supports VPC peering on GCP. Users who want to migrate from Google IoT Core simply need to choose Google Cloud as the cloud platform when creating new deployments on EMQX Cloud. EMQX cluster and user's resources on GCP, such as Cloud SQL, Kafka, MongoDB, and InfluxDB, can communicate by establishing a VPC peering connection. This communication is under the same network, making it more secure and reliable as it's a private network connection.

Make the right decision and get in touch with our dedicated IoT experts about your options after Google Cloud IoT Core. We will assist you in building your ideal replacement immediately.

In this tutorial, you can learn how to connect GCP IoT Core devices to EMQX Cloud via JWT.

In this series of articles, I will deliver a tutorial about the solution for migrating device connections from GCP IoT Core to EMQX Cloud with the same features equipped.

This article will introduce how to use the EMQX Cloud data integration feature to bridge data to AWS IoT through the public network so that you can easily use the AWS service to build IoT applications.